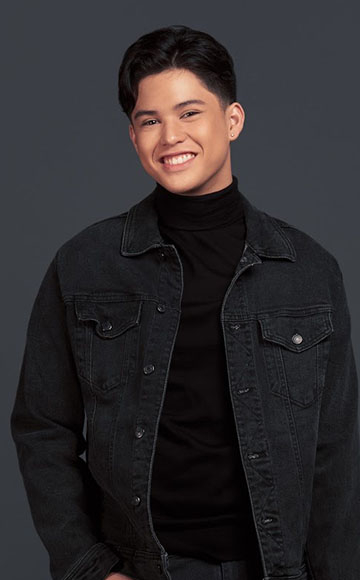 If you’re on the hunt for a promising multi-talented teenage star, Kyle Echarri’s magnetic gaze says ‘look no further’. At only eighteen years old, the 6-footer teenage idol has achievements under his belt that rival those of stars who have been in the industry longer than him.

His undeniable star power was first recognized on Season 2 of The Voice Kids, wowing the judges at only eleven years old. He finished in the Top 6 under coach Sarah Geronimo. Kyle has only risen up from then on, releasing his debut album “It’s Me Kyle” in 2016, with the carrier single “Fall For Me” becoming a hit: peaking at number 4 on Myx Pinoy’s MYX Countdown, charting for more than three months and two weeks.

By 2018, Kyle produced and released his self-titled second album under Star Music and Cornerstone Music, further showing his musical prowess. In 2019, he released a single entitled “Huwag Na Muna Ngayon” and a collaboration with Singaporean musician Haven on a track called “Imagine”.

In 2021, he released his third studio album entitled “New Views” which contains 7 tracks, including a collaborative track called “Liligawan na Kita” featuring Squad mate Seth Fedelin. Taking on the role of a performer, writer, and producer once more, Kyle continues to prove that he is a well-rounded musician who plans to take his music to a whole new level.

Aside from releasing his own records, Kyle is also known for his stints as a guest performer, recently becoming a frequent guest artist on ASAP, joining phenomenal production numbers.  And he was also an interpreter alongside Jeremy Glinoga for the 11th Himig Handog’s “Kahit Na Masungit” which became the contest’s 2nd best song.

Not only does Kyle have remarkable singing talent, he also got to show his theatrical acting chops early on in his career. Kyle Echarri graced the stage as Master Kundoktor in “Ako Ay Si Josephine”, a musical featuring the hits of Filipino pop-rock singer-songwriter, Yeng Constantino. In December 2016, he was cast as “Lito” in Ballet Philippines' “Awitin Mo at Isasayaw Ko”, a dance musical featuring the songs of VST & Co., at the Cultural Center of the Philippines.

He was cast in the top-rated ABS-CBN teleserye “On The Wings of Love” as lead actress Nadine Lustre’s half-brother Brent Wyatt. He also appeared in several MMK episodes such as “Boxing Ring”, as a bully to young boxing champion Nonito Donaire, “Cellphone”, where he played Gio, and “Hapagkainan”, where he was cast as Miguel.

However, his breakout acting role is the well-meaning boy next door Kristoff Tejada in the sensational ABS-CBN show “Kadenang Ginto”. In 2020, he starred in the digital series called “Bawal Lumabas” which highlights the struggles of OFWs. In 2021, he also took part in shows such as “Huwag Kang Mangamba” and “Click, Like, Share”.

His on-screen chemistry with co-star and eventual romantic interest Francine Diaz proves that Kyle works just as well with other people just as he does on his own. Kyle and Francine – adorably called “KyCine” by their fans – solidified their loveteam status by starring in an iWant original film called “Silly Red Shoes” presented by Dreamscape Entertainment. “KyCine” is also one-half of the phenomenal “Gold Squad”, the other half being the pairing of Andrea Brillantes and Seth Fedelin, a group of breakthrough teen actors popularized during their stint in “Kadenang Ginto”. The Gold Squad - which is now known as The Squad Plus after the group expanded to include more members - is an online phenomenon with their shared Youtube channel garnering more than 3.2 million loyal followers.

Kyle also became a housemate in Pinoy Big Brother: Kumunity Season 10’s celebrity edition. This became a unique opportunity for him to show the softer and more vulnerable side of his personality to his fans and those who may have misjudged him.

His popularity continues to grow especially on social media where he uses his platforms to inspire positive change. At 3.1 million followers on IG, more than 650 thousand followers on Twitter, 2.9 million followers on FB, and a solid fanbase that makes hashtags and topics about Kyle trend at every turn, it should not come as a surprise that he has become of one of the most sought out teen celebrity endorsers of his generation. As of 2021, he has endorsed brands such as Shopee, Mountain Dew, BPI, Head and Shoulders, Xiaomi, Avignon, GAOC, Goldilocks, Cornetto, and Axe. Additionally, the Eduk Circle Awards gave him the Outstanding Social Media Personality of the Year Award in 2019 for his contributions to social media.

His social media popularity also extends to Youtube and Tiktok where he has 1.2 million subscribers and 2.8 million followers respectively. His video content includes song covers which further showcases his singing abilities as well as vlogs and challenges featuring his fellow teen celebrities in the Philippines.

In 2021, to celebrate his 18th birthday and 6th year in showbiz, Kyle hosted a birthday concert on Kumu, serenading fans with songs from his latest album “New Views”. This was a special time for Kyle as it marks his transition to being a more mature person with new takes and new views on life, hence the title of the album which was released days before his birthday.

The fact that Kyle is still in his late teens proves that he still has so much to offer to the world of Philippine showbiz. You could say that Kyle is just getting warmed up.

Performing in casino is a lucrative business for Filipino singers. These artists are known for their quality music and have a reputation for being good musicians. But the Philippine market is also slightly different from the North American and European markets. In the United States, a number of Filipino singers can be seen on the stage of online casinos you can trust and other entertainment venues. Most people who visit these places gamble, so Filipino singers often perform at casino shows as a form of entertainment. It is known that some Filipino pop stars even sing in casinos, but they rarely get a recording contract.